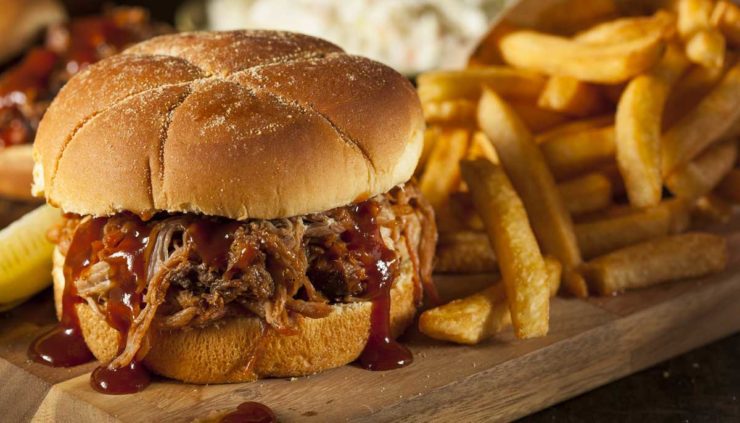 Barbecue is a distinct American cuisine, but it varies widely across different regions of the U.S. And let me tell you, debates over which state makes the best barbecue can get really heated.

Several states have their own different traditions, leading to some very different kinds of barbecue. From meat choices, to wood, to sauce ingredients, there is a ton of variety. And to be honest, you should be trying all of them!

Don’t know your Carolina Gold from your Burnt Ends? Here is a cheat sheet to help you navigate some of the most notable barbecue styles in the U.S.

North Carolina is actually known for two different styles of barbecue, dividing the state in half: Eastern-style and Lexington-style.

Eastern-style is considered the original and oldest form of American barbecue, and it uses the entire pig when barbecuing. The meat is served chopped and mixed together, and features a tart sauce made from vinegar and spices.

In Western North Carolina, Lexington-style reigns supreme. It is also sometimes called Piedmont-style. It is made from only the pork shoulder and comes dressed in a vinegar and tomato-based sauce that is often made with ketchup. In fact, this style was invented thanks to the introduction of Heinz ketchup in 1876, which caused a schism in barbecue styles in NC.

Though South Carolina’s barbecue is similar to NC’s because it is also whole-hog and utilizes vinegar for the sauce, SC’s sauce is distinct. Dubbed “Carolina Gold,” this zingy sauce is mustard-based and also uses brown sugar, vinegar, and spices. The unique flavor is thanks to German immigrants that arrived to South Carolina settlements with their distinctive mustard.

When you think of barbecue, you’re likely thinking of the stuff from Kansas City, Missouri. It features a variety of meat, particularly beef, pork, and lamb. The meat is slow-smoked with a dry rub and then served with a thick, sweet tomato-based sauce. KC barbecue spots are also known for serving up burnt ends, which are the crispy charred ends of beef brisket.

Memphis loves pork, and the barbecue here is either pulled pork or ribs. The ribs are served either dry  (seasoned with a dry rub) or wet (brushed with sauce before and after cooking). Pulled pork is topped with barbecue sauce and served on sandwiches, though folks in Memphis are also known to put pulled pork on other foods to create non-traditional mashups like barbecue salad or barbecue spaghetti.

Everything is bigger in Texas, so of course this state has to have not one but four prominent styles of barbecue:

How many of these amazing regional barbecue styles have you tried?