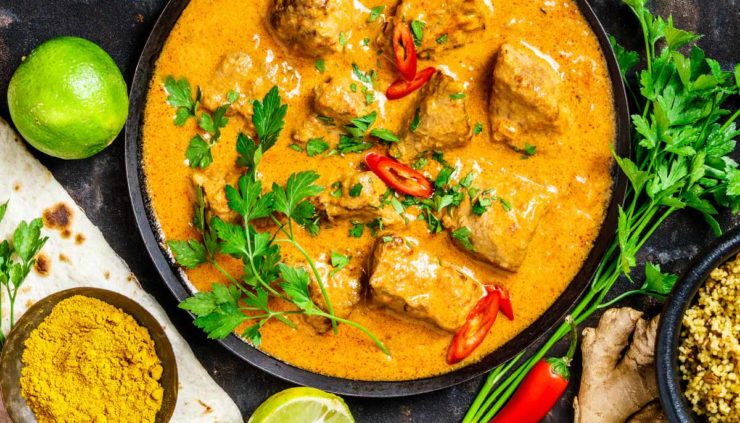 Countries With the Best Curry in the World

One of the greatest parts of traveling is being able to enjoy the foods of many different cultures. Every place has its own unique cuisine. There’s one kind of food that tends to be found all over the globe, though: curry.

Although curry dishes around the world are all rooted in Indian traditions, each country’s version of curry is vastly different. And let me tell you, they’re all amazing.

If you consider yourself a lover of curry dishes, do yourself a favor and try curry in these 5 countries!

Obviously, any list concerning curry has to include India. It’s the place to go for some of the world’s best curry, although what we know as “curry” isn’t really called that in India. The term was invented by the British during their rule over the Indian subcontinent. When in India, instead of using a blanket term like curry, all the dishes have their own individual names, like malai kofta, dum aloo, or matar paneer.

Still, India is the birthplace of all curry, and you’re guaranteed to find some of the best dishes in the world here. The content and style of preparation vary depending on the different regions. No matter where you are, it’s all delicious.

Curry as Westerners know it came to be through Britain’s colonial rule over India. So, naturally, Britain definitely belongs on this list. Brits have been head-over-heels with curry since those imperialist days, and it’s now frequently ranked as their favorite food.

There are hundreds of curry houses in London and Birmingham alone, and popular recipes include biryani, korma, vindaloo, and sambar. Britain’s most-loved curry dish, though, is the ever-popular chicken tikka masala, which was originally based off of the Indian dish butter chicken.

Thai curry dishes are made with various types of curry paste, and tend to be (mostly) color-coded. Red curries are made with chilies or chili powder, while the spicier green curries are made with (you guessed it) green chilies. Yellow curries are a milder option, and the golden color comes from turmeric. Outside of these, there are also other types, of course, like Massaman curry, which has a unique Persian influence.

Cambodia is serious about curry. In fact, the national dish of this country is a variety of Cambodian curry, called amok. It’s coconut fish steamed in banana leaves. Cambodian dishes tend to use fish and rice a lot, because of the abundance of both. And thanks to lingering French influences, curries in Cambodia are likely to come with a baguette.

While Japan probably wouldn’t cross your mind as one of the best countries to try curry, it deserves a spot on this list. Curry is extremely popular there, although the country has no colonial connections to India and has mostly shunned other food cultures for most of history.

Still, Japan has some really delicious takes on curry dishes. Try common dishes such as kare pan, which is curry stuffed inside a roll; karee raisu, which is curried rice; and karee udon, which is a dish of curried wheat noodles.