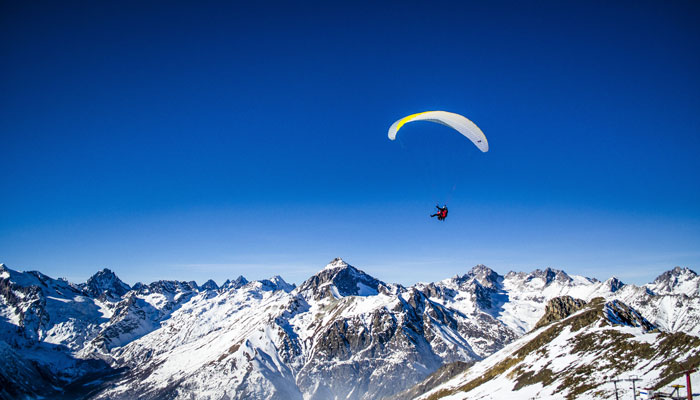 If you’ve had skydiving on your bucket list and have decided you’re finally ready to take the plunge, the beauty of these top drop zones is going to make you wonder why you’ve waited so long! There are so many amazing drop zones around the world, so it can be difficult to narrow it down.

But here is a list of a few top spots to get you started. Which one would you be most excited to experience first?

New Zealand is seen as one of the top countries in the world for skydiving and other extreme sports, and there are plenty of astonishingly beautiful drop zones here. Fox Glacier is a favorite. It’s an 8-mile-long glacier on the west coast of New Zealand’s South Island, located in the remote Westland Tai Poutini National Park.

You’ll be treated to breathtaking views of the untamed rainforest, glaciers, the snowy Southern Alps, and the ocean.

Dubai is quickly becoming a top skydiving destination. Flying over an iconic man-made island shaped like a palm is something you won’t be able to experience anywhere else in the world. You’ll also get an amazing view of the Persian Gulf, and the rest of Dubai itself.

This destination continues to be a favorite for many skydivers, and is known for being one of the most scenic drop zones in Europe. Past the snowy peaks of Jungfrau and Matterhorn, some of the highest peaks in the alps, you’ll have spectacular views of Germany, Austria, France, and Italy.

This Southern California jump is so high that you’ll be given supplemental oxygen on the ride up. At 18,000 ft, it’s the highest in North America. They also offer jumps as low as 7,800 ft, and their standard jump is 13,00 ft.

Not only will you experience beautiful panoramic views of the California coastline, but you might also be lucky enough to witness a rocket launch from the Vandenberg Air Force Base.

Easy Ways to Make Traveling With Kids a Little Easier

Traveling can be a great experience for kids. It’s important for them to have adventures, learn about other cultures, and explore the world with us. However, if you’re planning big travels with small kids...