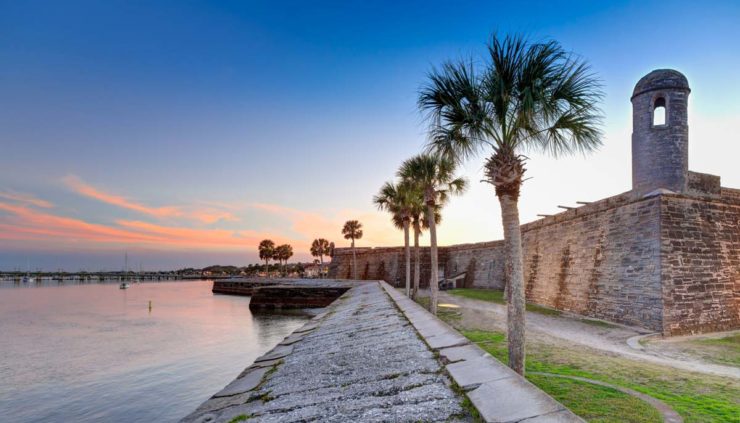 Also known as “the Ancient City,” St. Augustine, Florida, was founded in 1585. That makes it the oldest city in the United States–in fact, it’s almost 200 years older than the country itself!

All that history makes it the perfect destination for ghost hunters in search of some serious paranormal activity.

If tracking down spirits is on your bucket list, it might be time to check out the nation’s oldest city. Here are the top 5 most-haunted spots of St. Augustine that you absolutely need to check out!

This magnificent fort has been standing as it is since the 17th century and is the largest masonry structure of its kind in the country. Since it has survived more than 300 years of invasion, battles, disease, and storms, it is a hotbed of supernatural events.

On stormy nights, some report seeing a light in the watchtower, where there is no power source. There have also been plenty of orbs, unusual mists, lights, or apparitions caught in visitors’ videos and photos. But if you really want an inexplicable experience, venture into the dungeon, which has reportedly left people chilled to the bone.

The Old Jail is considered one of the most haunted places in the city. It was built by Henry Flagler and opened in 1891, but the developer certainly wasn’t concerned with the inmates’ comfort. The jail was infamous for its inhumane conditions. Inmates that did not die by execution perished from illnesses caused by living conditions inside the jail.

Ghost sightings and paranormal activity are rampant here. Ghost hunters exploring the jail report hearing chains, footsteps, and voices. There are also claims that people have been pushed or tripped by an unseen force.

This military hospital was built in the late 18th century and is no stranger to unusual paranormal activity. Some people attribute the activity and sightings to the trauma and deaths that hospital patients suffered, but there might be another reason.

The hospital was rebuilt in 1821 when the city had to replace water lines that ran under the building. But during construction, workers discovered tons of human bones buried underneath. It was discovered that the hospital was sitting on a Timucuan burial ground.

Located just across from the original gate into the city, the Huguenot Cemetery opened in 1821. It is the most haunted cemetery in St. Augustine, and likely one of the most haunted in the entire country. Largely because of a yellow fever epidemic, so many people were buried here that it was closed in 1884 due to overcrowding.

With so many burials, it’s a no-brainer that it is home to plenty of paranormal activity, but one of the most well-known spirits wandering the cemetery belongs to Judge John B. Stickney. His family had his body exhumed when they moved from the area, but witnesses claim to still see him. It is believed that his spirit is looking for items that were lost or stolen during his exhumation.

Built in 1874 as a replacement for the original 17th century lighthouse that suffered damage from harsh weather conditions, this spot is very well-known for its paranormal activity. In fact, it has even been featured on the TV show Ghost Hunters.

Some say that they have seen the spirits of a pair of young girls that drowned. Others have heard the voices of the children. Some visitors believe they have experienced the presence of Mr. Andreu, one of the past lighthouse keepers that fell to his death while painting the tower.